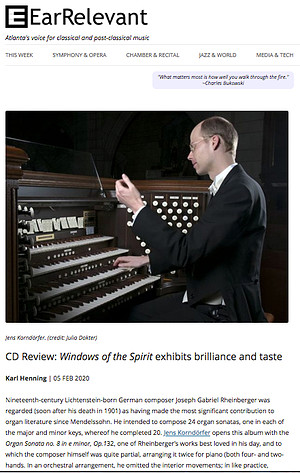 Nineteenth-century Lichtenstein-born German composer Joseph Gabriel Rheinberger was regarded (soon after his death in 1901) as having made the most significant contribution to organ literature since Mendelssohn. He intended to compose 24 organ sonatas, one in each of the major and minor keys, whereof he completed 20. Jens Korndörfer opens this album with the Organ Sonata no. 8 in e minor, Op.132, one of Rheinberger’s works best loved in his day, and to which the composer himself was quite partial, arranging it twice for piano (both four- and two-hands. In an orchestral arrangement, he omitted the interior movements; in like practice, Korndörfer here plays the Introduction (a brief, majestic fantasia) and Passacaglia, the latter of which the organist-composer Alexandre Guilmant (to whom Rheinberger dedicated his Ninth Sonata) lauded as “superb.” The diptych opens the CD in force, with the passacaglia voiced and shaped with especial magnificence.

When the English poet Edward FitzGerald published the first English translation of The Rubáiyát of Omar Khayyám “The astronomer-poet of Persia” on 15 January 1859, scarce anyone paid it heed. However, it came to be popular in the mid-1860s, drawing in particular the admiration of the pre-Raphaelites. After FitzGerald published a third edition in 1872, interest in the work increased in the U.S. And indeed, after the poet’s death in 1883, it became all the rage. Salem native Arthur Foote, organist at Boston’s First Church (Unitarian) since 1878, and a founder of the American Guild of Organists, was present at the first meeting of the Omar Khayyám Club of America, in Boston on 31 March 1899.Foote’s enthusiasm for the Rubáiyát set in early and hard: He published his Five Poems after Omar Khayyám, Op. 41 for piano in 1899, and made an orchestral version in 1900. No. 1 in both these versions is the Oriental Sketch, which Foote published as an organ transcription in 1923, a sweet bit of musical tourism.

Korndörfer commissioned Pamela Decker (b.1955) to compose Windows of the Spirit for the dedication concert (28 September 2018) of the Klais/Schlueter organ at First Presbyterian Church in Atlanta. The piece pays tribute to and draws inspiration from the Louis Comfort Tiffany stained glass windows housed in the church. The wide-ranging, episodic piece is grounded in two themes consisting of pitches mapped from letters: the phrase “beam of white light,” and the German Auferstehung (“Resurrection”), respectively. A central syncopated dance takes as its motto the pitches ABBA (English usage, not German) from the Aramaic “abba” (father, or “papa,” really.)

J.S. Bach’s F Major Toccata & Fugue, BWV 540, and Max Reger’s Phantasy on the Chorale “Ein’ feste Burg ist unser Gott”, Op.27 occupy the heart of the album. The textures of Reger’s music are famously dense, and in less-experienced hands (or, on an unsuitable instrument) the impression might be over-saturatedly rich. The present organist’s sensitive ear and expert voicing, combined with a source chorale so universally known and loved, serve Reger to wonderful advantage. Although I did indeed like Reger before now, Korndörfer’s presentation here of the Op.27 has made of me a Reger enthusiast.

The concluding third of the album is given to organ transcriptions of orchestral works: Korndörfer’s own transcription of the Andante from Beethoven’s Symphony No. 5, and the Overture to Wagner’s opera The Flying Dutchman, arranged by Edwin Henry Lemare (1865-1934). The pedigree of the wonderful instrument in First Presbyterian, Atlanta is: Pilcher 1919; Möller 1969; Zimmer 1992; Klais/Schlueter 2018. There is thus a considerable historic breadth of timbral resources which Korndörfer marshals with both brilliance and taste.