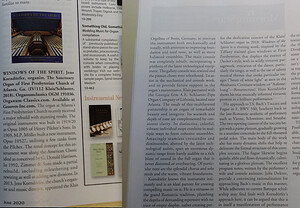 The organ at Atlanta’s First Presbyterian Church recently received a major rebuild with stunning results. The original instrument was built in 1919/20 as Opus 1005 of Henry Pilcher’s Sons. In 1969, M.P. Möller built a new instrument, Opus 10527, utilizing a few ranks from the Pilcher. The tonal concept for this instrument was along the American Classic ideal as conceived by G. Donald Harrison. In 1992, Zimmer & Sons made a partial rebuild, including releathering and rewiring as well as adding new divisions. In 2013, Jens Korndörfer, the church’s organist and music director, appointed the Klais Orgelbau of Bonn, Germany, to renovate the instrument both mechanically and tonally, with attention to improving foundation and reed tone, as well as more balanced ensembles. The main console was completely rebuilt, incorporating a plethora of the latest technological equipment. The gallery console was rewired and the pitman chests were releathered. To assist in the mechanical and console work, and to provide future support in the organ’s maintenance, Klais partnered with the Georgia firm A.E. Schlueter Pipe Organ Company of Lithonia, located near Atlanta. The result of this multilayered partnership is an organ of remarkable beauty and integrity. Its warmth and depth of tone are complemented by consistent clarity. Its distinctive, colorful, vibrant individual stops combine in multiple ways to form cohesive ensembles. Amazingly seamless crescendos and diminuendos, abetted by the latest technological assists, span an enormous dynamic range from barely audible to a rich blaze of sound in the full organ that is never distorted or overbearing. Of particular note are the splendid chorus and solo reeds and the warm, vibrant foundations.

Korndörfer knows this instrument intimately and is an ideal partner for creating compelling music on it. He is a virtuoso in the grand Romantic tradition, plumbing the depths of demanding repertoire with no trace of empty display, rather creating performances that are deeply musically satisfying as well as exciting. His program on this recording, featuring works by German and American composers, is designed to showcase the organ’s orchestral possibilities.

Rheinberger’s Introduction and Passacaglia from Sonata No. 8 is a perfect introduction to player and instrument. With its multifarious textures and moods, it beautifully demonstrates both the diverse color of individual stops and ensembles as well as the consistent clarity revealed in the contrapuntal textures. A lovely contrast is the quaint Oriental Sketch, Op. 41/5, of John Knowles Paine, featuring some of the organ’s colorful solo voices.

Korndörfer commissioned organist/composer Pamela Decker to write a work for the dedication concert of the Klais/Schlueter organ in 2018. Windows of the Spirit is a riveting work, inspired by the Tiffany stained glass windows at First Presbyterian, that displays the essence of Decker’s style, with its wildly virtuosic passagework, evocation of the dance, partic- ularly the tango, as well as the use of salient musical themes that evoke particular images (“beam of white light” as seen in the Abrahamic Covenant window, or “Auferstehung”—Resurrection). Here Korndörfer shows his true musically informed virtuosic prowess in a brilliant performance.

His approach to J.S. Bach’s Toccata and Fugue in F, BWV 540, harkens back to the late-Romantic aesthetic of performers such as Vierne, Schweitzer, and Straube. The two opening canons of the toccata begin with a piano plenum, gradually growing in a seamless crescendo to the full-throated pedal solos. The main body of the work also has many dynamic shifts that help to delineate the formal structure of this complex toccata. The fugue likewise begins quietly, ebbs and flows dynamically, culminating in a glorious plenum. The excellent program notes, written by the performer’s wife and console assistant, Julia Dokter, provide a convincing rationalization for approaching Bach’s music in this manner. While adherents to current Baroque scholarship may find fault with Korndörfer’s approach here, it can be argued that this is in itself a manifestation of performance practice, in that it has a valid historical precedent.

Max Reger’s Phantasie über den Choral “Ein feste Burg” provides plenty of opportunity for performer and instrument to prove their mettle. This performance fulfills every requirement. Clarity is maintained throughout; the threads of cantus firmus and counterpoint remain distinct even in the most convoluted passages. Korndörfer finds the right balance of tempo, registration, and phrasing to make this a most satisfying and thrilling performance of this complex work.

The final two works are transcriptions. The first, transcribed by Korndörfer, is Beethoven’s Andante from Symphony No. 5. He achieves remarkable fidelity to the original in many of his registrations and textures, some accomplished by the use of the thumbing technique and the Pedal Divide, in which the left foot plays the bass notes while the right foot plays upper parts on a different registration. Finally, Wagner’s Overture to “Der fliegende Holländer” as transcribed by Edwin H. Lemare brings the program to thrilling close. Korndörfer achieves some phenomenal, seamless crescendos and diminuendos between ppp and fff that demonstrate both the performer’s registrational skill and the instrument’s capability, both through proper voicing and tonal relationships, and technological aids such as the sequencer and multiple memory levels (224 general pistons were used in this performance).

The acoustical environment at First Presbyterian Church is moderately favorable, with a brief amount of bounce-back reverberation. The organ, divided between chancel and gallery divisions, is well captured by recording producers from MSM Studios of Munich, Germany.

This recording is highly recommended for playing that is superior both technically and musically, showcasing one of the finest organs in the Southeast.